Enjoy the splendid Riviera del Brenta through a mid-day guided tour! Meeting point in Fusina, going to Dolo and coming back. Let’s ride?

50 EUR/pers
35 EUR/pers for up to 11-y.o (included) children (the height will be asked to provide the proper bike)

4-hour excursion (about 20 km) from Fusina to Dolo.
Available for 2 to 15 people
Departure at 10 am from Fusina, at the disembarkation of the boat from Venezia Zattere. We suggest you buy a one-way ticket for the boat from Venice (cost 10,00 euro) and that you catch bus ACTV line 53E to get back to Venice from Dolo (ticket 4,00 euro).
Tour on bicyle paths
Bike for cycle tourism 7/21 with side bags
On rare occasions, he tour could be be held from Dolo to Fusina: in this case a free pick-up by minibus from Fusina to Dolo is included.

Eventual transfer from the hotel and vice versa ( € 10,00 per person on request )
Entrance to museums and monuments (Entrance Villa Foscari “La Malcontenta”: Full price: Parc and Villa € 10,00 ; only open from 9am to 12am)

In case of cancellation up to 24h before the experience, 50% of the price withheld. Then, or in case of NO-SHOW, no refund.
In case of bad weather, the partner can either postpone the experience or cancel and refund 100%.

From April to October. Not available on Mondays (for villas are closed).

Enjoy a wonderful bike ride through the beautiful Riviera del Brenta. Along the riviera venice you will find Palladian UNESCO heritage villas and charming riverside villages, which are a great place to stop on your cycle-tourist routes.These cycle routes along the brenta river are suitable for everyone and ideal for discovering a corner of Veneto with a fairytale landscape.

.
The guided tour will allow you to get to know the river Brenta on two wheels and the fascinating history of the villas along the way. The Brenta is the historic waterway that connects Venice to Padua. It is a land rich in resources and the river here has attracted human settlements since prehistoric times. In the period of the Serenissima, the Riviera was among the places favored by the noble Venetians to stay over the hot summer season. This was not only to escape the humidity of the lagoon, but also to check the crops on their estates.We will be able to visit at least one of the famous Venetian villas open to the public designed by Palladio, on this tour. You will learn more about the unique heritage of this once prosperous area along the Brenta canal. 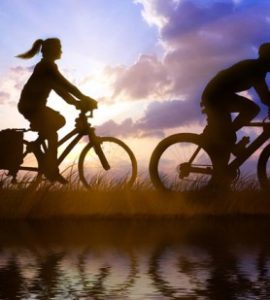 Visit the Brenta Riviera by bike: how to get from Venice

We meet at 10.00 am in the Fusina terminal. You can get here easily from Venice by boat. It leaves from the Zattere and takes just 25 minutes. The one-way ticket costs 8 euros and can be purchased online at the Fusina Terminal website, where you can also consult the timetable.

Riviera del brenta in bici: discover the route by bike!

The excursion lasts about 4 hours and covers a total of 20 kilometers, at a pace accessible to everyone. From Fusina we will ride the bikes along the brenta venice river leaving behind the mouth of the Brenta and the Venetian lagoon. We will continue the course of the Naviglio Brenta with various stops for information, until we reach the delightful town of Dolo. With its ancient squero and a picturesque mill still in operation, this little town always delights the passers-by.

The Naviglio Brenta is still the ancient navigable stretch of the river, with its moorings for boats that stopped near the Villas of the Doges and the lords of the Serenissima Venetian Republic. Our tour will allow us to admire some of these ancient period residences along via Brenta Bassa, the quiet road on the right bank of the river. We will stop to admire the majesty of the Villa Foscari, called “La Malcontenta”, built by Palladio and one of the most famous villas of the Brenta Riviera. There will be free time, to visit the villa if you want to.

Our route will cross the towns of Oriago and Mira, where there are many villas to admire. Once in Dolo, which marks the end of the itinerary, we will stop for a drink. We recommend a bàcari typical of this area to have lunch or to try a variety of cichèti … the cook here is really good.
After the cycling, Riviera and Villas we will return to Venice Piazzale Roma.
The excursion ends in Dolo with the pick up of the bikes. Afterwards you can decide to continue a full day on the Riviera or return to Venice. The ACTV bus line 53E, which stops all along the Riviera.
The routes are frequent and from Dolo we advise you to head towards Villa Pisani in Stra, which is certainly worth a visit to the estate and the gardens. The journey is twenty minutes.
If you want to return to Venice the same ACTV 53E line will bring you directly to Piazzale Roma! Bus tickets are available at the tobacconists in Dolo, or you can pre-purchase them at any ACTV store. Cost 4 euros.

Watch the video of this excursion and discover the Brenta Riviera by bike!
Would you like to organize this excursion for your group? Contact Us! We’re at your service.The Riviera del Brenta is a small corner of Veneto with many delightful surprises.