Enjoy the Brenta River by bike, so that you can enjoy the whole panorama, from Venice to Padua, stopping wherever you want, and why not organise a nice pic-nic on the riverside!


Great routes along by the river

Lots of sites to see

Stop for a villa visit along the way!

Ville Card, the card that at the cost of only 2€ will allow you to take advantage of discounts on entrances to the villas and on means of transport.

In case of bad weather a change of date, or alternatively a 100% refund, can be asked up to 24 hours before the selected date.

Exactly at the halfway point between Venice and Padua, runs the Brenta River (Riviera del Brenta) The Brenta is an Italian river that runs from Trentino to the Adriatic Sea just south of the Venetian lagoon in the Veneto region, in the north-east of Italy

The river runs through a unique Venetian landscape, where nature and architecture meet to create stunning scenery. Visiting this beautiful countryside landscape for the day is an ideal way to spend a day out from venice.

The best way to explore along the “Naviglio Brenta” is by bicycle. The route runs from Fusina to Stra for 24 km  (one way). It is a flat ride and a very popular route. There are plenty of small secondary roads to follow that run parallel to the canal.  This is a safe and fun ride for all levels of ability and a great full day out..

This bicycle route along the Brenta River is one of the most interesting of the various bicycle paths that follow Italian rivers. The route starts from the source of the Brenta (Lake Caldonazzo near Trento) and runs to the lagoon of Venice. 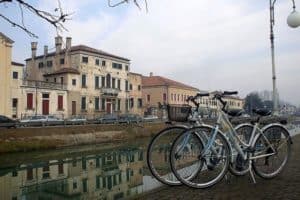 The Brenta Riviera, is a place full of artistic and cultural interest. Between the 16th and the 18th centuries, some of the most important families from Venice had their summer residences built on the Riviera that runs alongside the Brenta river, this waterway that connects Venice to Padova. If you cycle this way you will come across villas, villages and swing bridges. You can stop to visit a villa on the way if you like as many are open to the public. One of the most striking of the villas is the Villa Widmann-Foscari, also called Widmann-Rezzonico-Foscari.  It is found on the shores of the river Brenta located in the small town of Mira, between Venice and Padua. The present palace was built in the 18th century; a succession of families including the Sceriman, Donà, Foscari, have previously owned the site

The Naviglio Brenta or Brenta Canal that we ride along today is the result of a system of locks and swing bridges developed to make the canal easy to navigate.  The Dolo locks were particularly important since they were installed around a small island to form the only boatyard along the canal. The last lock downstream, the moranzani lock is just before the river enters the lagoon of Fusina.  The canal was a vital commercial waterway (many famous US canal systems were patterned after these works), that carried goods and passengers. Barges – il burchiello – were pulled up-stream by horses, and gondolas and passenger boats were “poled” along the river from the landing stage carrying groups of aristocrats to their country houses or parties.

Cycling is a great way to see the Brnta river in Italy. In this part of the veneto there are a variety of different types of cycling routes. We offer you the rental of excellent bikes equipped with saddle bags and suitable for cycle touring so that you can explore them for yourself!

You can also choose to use our bike shuttle service: where you’ll be able to collect the bikes from your accommodation and we will  provide you with lots of information about the cycle routes and the main places you can visit. And especially when it comes to food, you will be  told about the best restaurants to eat when you stop for lunch!

This route is one which used to be the most important route that linked the mainland to Venice (la Serenissima), both by road and river, but it also runs through one of the most beautiful landscapes in the world. Through this tour, you’ll enjoy the sight of the very famous Venetian villas  such as the Villa Foscari named “Malcontenta“, a Palladian masterpiece and the Villa Pisani of Strà. But also try some new Venetian countryside places and glimpse the beauty on the edge of the Venetian Lagoon.

Cycle and pedestrian tour between Mira Porte and Strà alongside the dam of the Rio Serraglio:

This is a route which is almost entirely on unpaved roads, however they are very easy to cycle on. From Mira Porte it follows Mira Taglio (both districts of Mirano), touching then the sports complex of Dolo, Fiesso d’Artico and leaving to the surroundings of the sports complex of Strà, just behind the huge parc of the Villa Pisani.

If you’re interested in doing this experience and you want more information, feel free to contact us! We’ll be glad to help you.