We will take you through the history of the four main bridges crossing the Grand Canal in Venice. You will get the stories, the “fun facts” and learn of the controversy surrounding the construction of the newest bridge in the city, the Calatrava bridge.  The most famous bridges in the floating city are the Rialto Bridge called Ponte di Rialto, famous for its row of shops, and the bridge of sighs connected to the Doge Palace. Visiting Venice, you will cross a lot of bridges and many canals before reaching the heart of the city, st mark’s square and saint mark’s basilica.

How many bridges in Venice?

Venice today, is very different from what it used to be. In fact, as weird as this sounds, originally there were no bridges at all! Why? People only used boats to go from one of the 121 islands to another – either their own or “public” ones. Because of technological progress, population growth, and the city’s increase in trade it became necessary to build routes that would connect the various areas.

This is how the 435 bridges of Venice are born. 300 are made of stone, 60 of iron, and the rest of wood. The evidence of the first stone bridges dates back to 1170. At first, they also had no hand rails. However, due to population growth ̶ and probably a few tumbles in the water ̶  railings were added during the nineteenth century.

Located in the very heart of the original city of Venice, it is the first stone bridge to connect the banks of the Grand Canal. From the city’s beginnings, “Rivoaltum” was the center of Venice’s trading power, and the first construction of this bridge dates back to the end of the twelfth century. Nicolò Barattieri created a bridge made up of boats joined by wooden planks that was called Ponte della Moneta (Bridge of the Coin), after the toll people had to pay to cross it.

It collapsed in 1444, when a heavy crowd rushed over it to attend a water parade. It was rebuilt in wood, with shops on both sides and a bridge which could be raised in between to allow bigger boats to pass. This second bridge partially collapsed in 1523. Various artists submitted their project for a new design for the bridge, including Palladio, Michelangelo, Vignola and Sansovino. The construction started in 1588 and ended in 1591.The  Rialto bridge became one of the most famous bridges in the world. 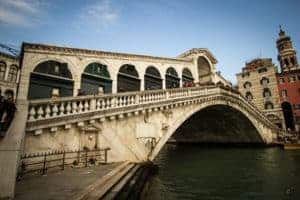 It was important to connect Rialto area with the rest of the city, famous for the rialto market and fish market.

The idea of having another bridge spanning the Grand Canal emerged only during the nineteenth century; however, some liked the idea, and others didn’t. The project was entrusted to Alfred Neville, an engineer specializing in building iron structures, and was inaugurated in 1854. Due to its very poor state, the bridge was demolished in 1933. 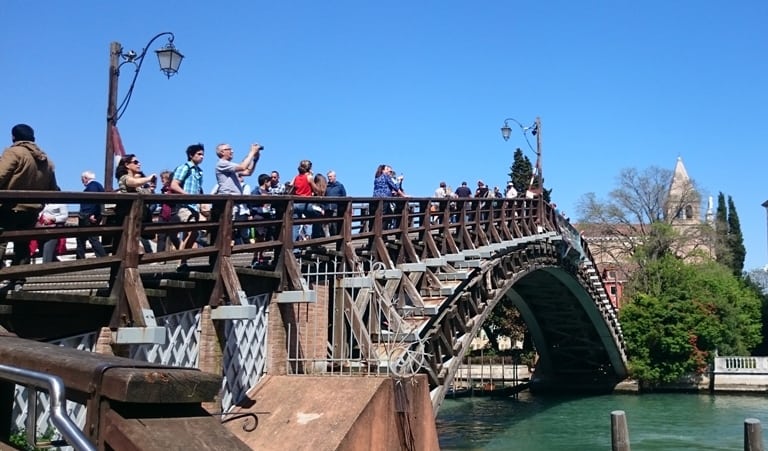 A temporary wooden bridge was then built in only 37 days, based on Eugenio Miozzi’s design. It was unique in its capacity to be maintained without blocking access over it or under. This project ended up being more permanent than temporary, given that eighty years later the bridge is still here!

The Scalzi bridge is very close to the train station. It took its name from the Santa Maria di Nazareth church it faces, which is known as “degli Scalzi” (of the barefoot [monks]) because for more than three hundred years it belonged to the Carmelitani Scalzi religious order.
It is also called “Ponte della ferrovia” (Train Station bridge) and was actually built after the train station opening ceremony in 1858, based on Neville’s iron bridge project. 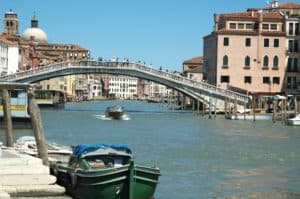 The state of the Scalzi bridge also gradually deteriorated, to be replaced with another of Miozzi’s design: a bridge made of Istrian stone that connected the most narrow part of the Grand Canal. Construction was finalized in 1934 and it was built in such a way as to be accessible to all sizes of boats. Nowadays, this bridge towers over the Canal and allows people to directly access the heart of the city.

The most modern bridge of Venice was built by the Spaniard architect Santiago Calatrava. It is made of steel and tempered glass that gives it a very modern look. Venetians did not exactly give it a warm welcome, since its style is so different from the rest of the city, made of stone and wood. 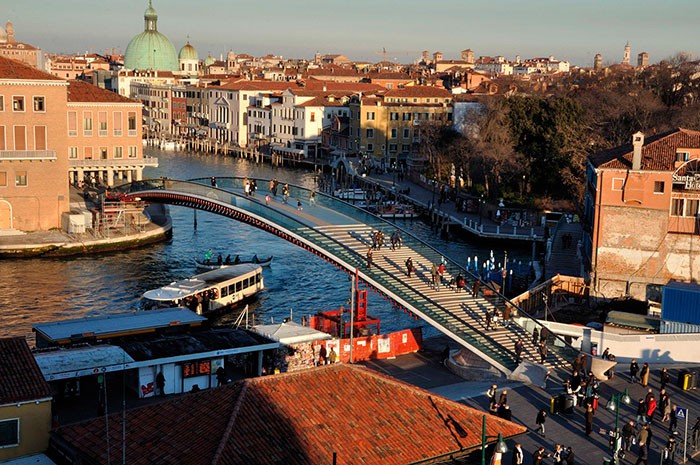 Designed in 1998, it was only built in 2008. In spite of all the criticism, it is one of the most used bridges because it connects Venice to its meeting point from the mainland: Piazzale Roma.

The Bridge of Sighs was built in Istrian stone in the Baroque style in the early seventeenth century by architect Antonio Contin, son ​​of Bernardino Contin and nephew of Antonio Da Ponte. The bridge was ordered by doge Marino Grimani. 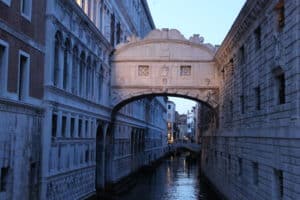 This iconic Venice bridge is a short distance from Piazza San Marco, crosses the rio di Palazzo, and connects to the Palazzo Ducale to the Prigioni Nuove (new prisons) It served as a corridor for the inmates from the prisons to cross to the offices of the State Inquisitors. Famous all over the world, and  photographed by million of  tourists, you can view it from two places: from the Canonica bridge and from the Ponte della Paglia. The name refers  to the fact that during the Serenissima (The republic of Venice), the prisoners, passing through it, sighed at the prospect of seeing the outside world for the last time.

What about the famous steps? it is a fact that until the sixteenth century the bridges in Venice had no steps at all in order to allow horses to cross easily.

Each bridge has its own story, fascinating and mysterious. Don,t forget the Ponte dei Pugni (Bridge of Fists) or Ponte del Diavolo (Bridge of the Devil). And what about the Ponte delle Tette (Bridge of Boobs!) The most famous pontoon bridge is the one created during the redentore festival that connects Venice to Giudecca Island, created in one day to allow people to reach the Redentore church.

Visiting venice: up and down the bridges

Only a few bridges have ramps, so you will have to go up and down in this city across many bridges. Up and down … Passing under the venice bridges means veiwing Venice from the water, it really is worth it! Whether you decide to take a gondola ride, row yourself, or pick up a water bus, you will have a completely different view of the city. Check out our tours from the water! If you want to know more about the bridges, it is worth taking a guided tour that will give you an overview of the history of Venice. Visiting a place with a guide really helps you to understand the city.