If you are visiting Venice during the Carnival, you are about to live an incredible experience.

The Venice Carnival is famous for its strong identity. The venetian traditional masks have alway been considered as art pieces over the centuries. And they are still trendy today, thanks to the imagination and creativity of artisans and fans.

The history of the Carnival of Venice is very ancient and has characterized the life, even political, of the Serenissima. We can well say that the whole course of the history of the Republic has been characterized by a continuous search for balance: between order and dignity on the one hand and on the other hand by the need to ease social tensions by giving an outlet to the most disadvantaged social classes (thus trying to avoid discontent and riots).

Most of the people think that the celebrations of Carnival we see today have been perpetrated years after years in the respect of the tradition… but the truth is a bit different. Let’s review 5 facts about Venice Carnival history that will surprise you !

1- History of Carnival : Let’s go back to the Roman Empire

The Carnival in Italy, but it would be better to say in the world, has such an ancient origin to find its roots in the rite of Navigium Isidis, a ritual in mask (see article on the origins of the carnival) in use in ancient Egypt in honor of the god Osiris risen thanks to the intervention of the bride Isis. From here, from the middle of the second century AD the rite spread through the Roman Empire, in a world that would have remained pagan for a short time.

And it is precisely with the rise of Christianity that the history of Carnival begins to have the cadence on the calendar that we continue today.

The etymology of the term carnival seems to date back to the Latin carnem levare (or remove the meat) in reference to the period of Lent that opens with Ash Wednesday, the day immediately following Shrove Tuesday, the day of closure of the Carnival. Now, it is not that this etymology convinces all the critics, but we spare you the philological essay and go on with the story.

With the fall of the Roman Empire, Europe began to differentiate itself culturally and from here on, the history of the Venice Carnival began to acquire the nuances and take on the characteristics that we know today.

We Venetians, skillful merchants as well as bureaucrats, since the beginning of our history have always had the obsession to write down everything and keep official documents: not just in the Middle Ages!

But it is thanks to the first Venetian engravers that we can say with certainty that already in 1094 the Carnival in Venice was very much lived. So much lived to push the doge Vitale Falier to draw up a dogal decree in which exceptional security measures were established for the festive period before Lent.

In fact we have to wait another 200 years before the Carnival is officially recognized: in 1296, in fact, Shrove  or Mardi Gras (Fat Tuesday)  became a public holiday for all intents and purposes. It was a very special day, when people were allowed to mock the institutions and patricians. This was not a recent concession in a 13th century Republic that held a great deal of public order! 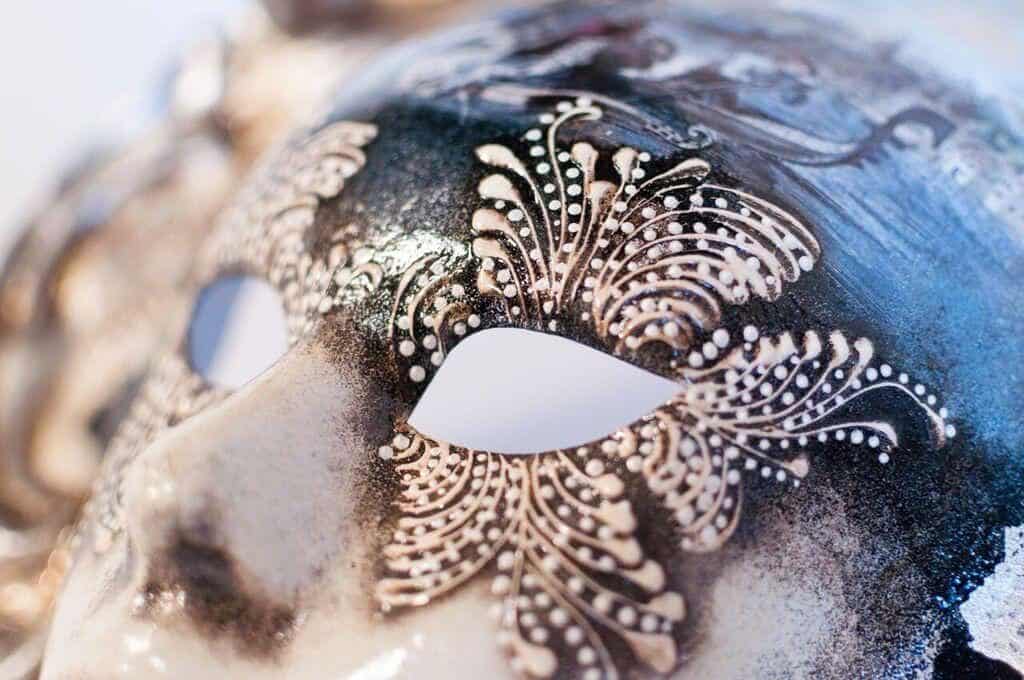 The history of Venetian Carnival is characterized by a real flourishing of laws that tried to limit its excesses. Excesses due in particular to some noisy masked groups that, with their jokes and their tricks, often dictated by inebriation, threatened the tranquility and morality of the city … all protected by the anonymity of the masks!

For example, between the 16th and 18th centuries the use of the mask has been gradually banned on countless occasions: well, understand that if it was necessary to enact the same law several times means that the previous ones must not have been taken literally! 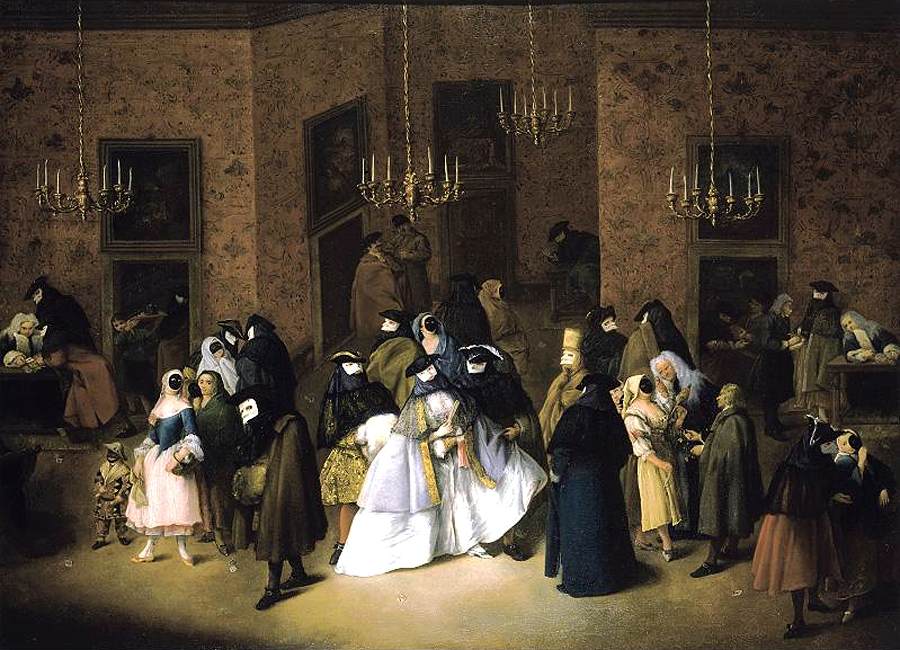 But in the end, the carnival mask, and more generally the disguise,

was widespread in Venice even in the periods outside the Carnival because it allowed activities in which anonymity was important (as for gambling or to give to the protagonists of the libertine enterprises the security of being able to successfully carry out their love missions)!

In the 18th century the Carnival flourished and reached its maximu

m splendour: there was a proliferation of stores selling masks and costumes, juggling and acrobatics attractions, theaters and the Commedia dell Arte, whose costumes remained immortalized in the tradition of Venetian masks. It is also the era of libertines, like the most famous and scandalous heartbreaker in history, Giacomo Casanova!

The history of the Carnival of Venice was abruptly interrupted in 1797, coinciding with the foreign domination. The French first decided to ban the festivities before Lent. Not so much to stop the “morale decline”, but for fear that among masks and popular entertainment could hide much deeper subversions of political order. The same choice was adopted by the Austrians: the Carnival in Venice remained a blurred dream that survived in the memories of the elders and in some festivities in the smaller islands.

The spirit of Carnival seemed by now forgotten but it was ready to shine again: in 1979 the commitment of the City of Venice, La Fenice Theatre, La Biennale di Venezia and other tourist organizations brought back into vogue what will become one of the most famous events in the world!   And it is with these 200 years of detachment that we explain why the current carnival follows the never completely lost costumes of the carnival of the 18th century. 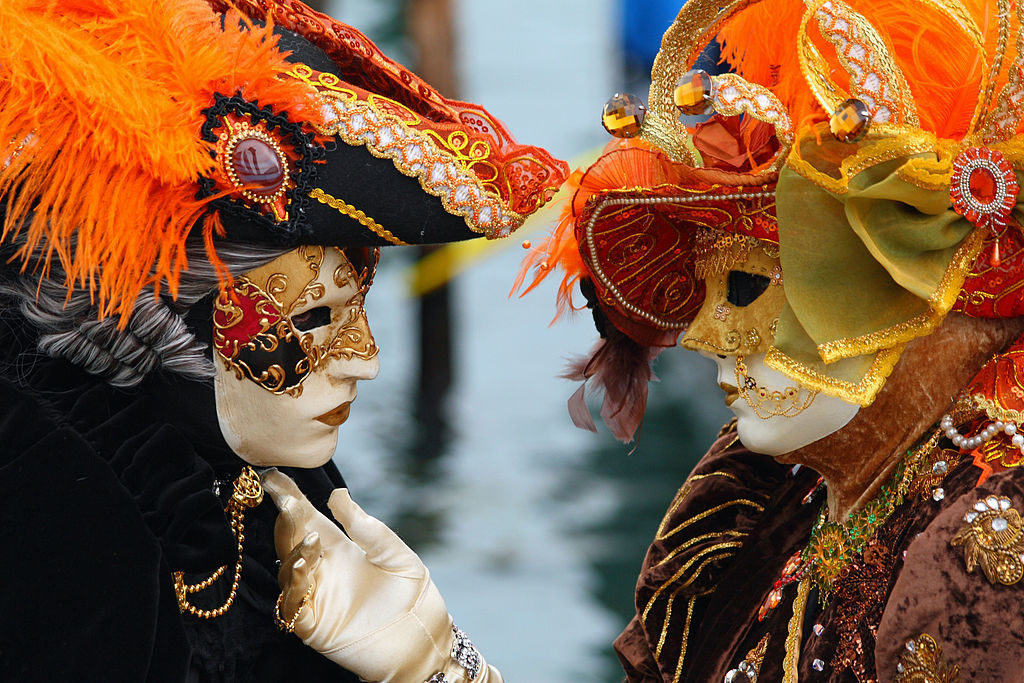 5 – Venice Carnival History : The flight of the Angel or the turkish funambulist

It seems that it was performed for the first time during the 16th century, when a Turkish funambulist reached the top of the bell tower in Piazza San Marco, walking on a rope fixed to the pier, then descending in a spectacular way. 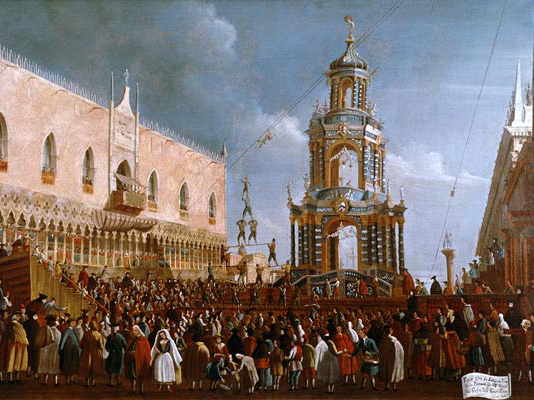 Since then, many acrobats have repeated the exciting flight, descending from the bell tower towards the Loggia. The event was enriched with details such as the throwing of gifts to the crowd on the mark’s square and the awarding of the artist’s prize by the Doge, up to the disastrous fall of the acrobat in the mid-18th century. The angel-acrobat was replaced by a wooden barrel until 2001, when the tradition was restored with real “angels” in flesh and blood, chosen among prominent personalities such as athletes and singers, usually women.

The plot of this thousand-year-old event consists of the choice of twelve poor and pretty Venetian girls, who celebrated their wedding on the day of the purification of Mary, February 2. On this occasion, the nobles and the doge gave or lent them sumptuous dresses and jewelry. It is said that in 943, pirates raided St Mark’s  church and kidnapped the young girls, but the Venetian nobles led by the Doge chased them until they recovered the loot.

To commemorate the event, the parade of Maries was established and still continues today.

Let’s not forget the food and drink Carnival traditions

Frittelle and galani: Among Venetian sweets, frittelle and galani are those which best represent Carnival time. Frittelle are sweet balls of soft fried dough with raisins and pine nuts (they can also be filled with custard), while galani (also called chiacchiere or crostoli) are flat puff pastries, fried and covered with icing sugar. 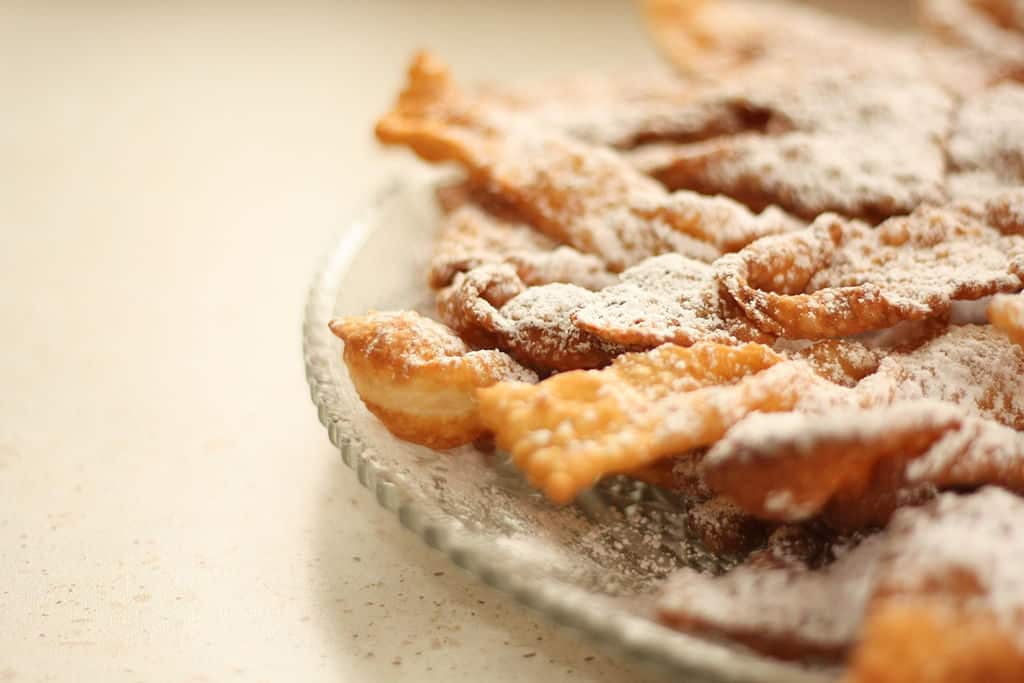 These articles may also interest you ...