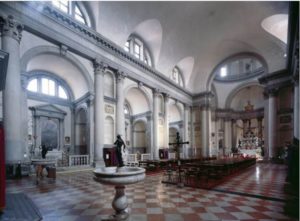 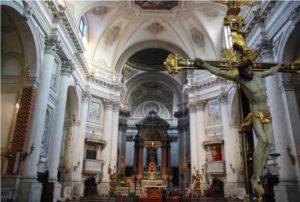 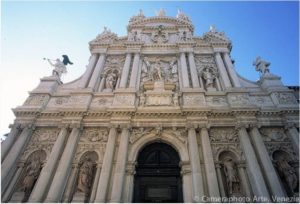 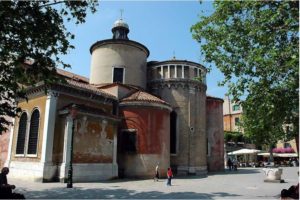 Venice church: the Enchanting ones!

Enter the most beautiful churches of Venice and listen to the thousand-year old story they’ll tell you. The 18 churches included in the Pass display the greatest collection of sacred artworks from Tiepolo, Veronese, Tiziano and other Italian masters.

Not just the Basilica of saint mark!

St marks’ basilica is a jewel, but it is not the only church worth visiting in venice. The churches in Venice dominate and embellish every corner of the island so much that we can not deny the ancient saying:”In Venice there are more churches than Christians!”
Each venice church is a little gem and seems to compete with the next one to be the most beautiful.
Everyone says that from above, Venice looks like a fish. If you get the chance to have an aerial view you will have also noticed that this funny fish-shaped city is full of peaks. These are not skyscrapers, but elegant bell towers that stand out above the houses snaking around the grand canal.
Venice is full of churches and bell towers, and we will help you to discover the most interesting ones to visit!

Venice church: a flourish of beauty!

The Lion of Saint Mark, representing the evangelist St Mark, pictured in the form of a winged lion holding a Bible, is the symbol of the city of Venice and formerly of the Venetian Republic.
During the glories of the Republic of the Lion, it was used for noble families or corporations (the current “trade associations”) rivaling each other in building or adorning their private chapel. The best artists of the time were employed and so the churches in Venice, not only symbolize an inestimable historical and artistic heritage of Venice, but they are witnesses to 1000 years of history.

The patrons of churches and bell towers were not only the heads of families, but above all nobles, wanting to make their mark in the city and to show their wealth and power by building the largest church or the tallest bell tower.
These noble Venetians, have left us an extraordinary  legacy of works of art by tintoretto, Pale by giovanni bellini, and buildings by Palladio!

Churches in Venice: you are spoiled for choice …

Every self-respecting Venetian has a church of Venice in their heart. Why? Simply because  there is one everywhere!. Every square,the meeting place preferred by the Venetians has its own church!
In the San Marco basin we find San Giorgio Maggiore, a small pearl of white stone designed by Andrea Palladio. Its sister church, the church of Our Lady of Health, were both built to commemorate the end of two serious plagues which killed many thousands of citizens.

We must mention the basilica of the santi giovanni e paolo, also called the Pantheon of Venice. A splendid example of medieval architecture begun in the twelfth century. Not far away, the Basilica dei Frari, which houses the works of art by Titian!
A stone’s throw away, the Grande Scuola di San Rocco, with an adjoining church! In the 16th century, Tintoretto, spent 20 years of his eminent career painting amazing frescoes here!

Next, let’s move now to the Cannaregio district, from the field of the Holy Apostles, aim northwards, until you reach the Madonna of the Garden at the end of the lagoon!

The soul of Venice

This vast wealth of heritage and religious buildings are an incredible legacy. They are beautiful buildings but also have incredible stories to tell us about the past of Venice. Vivovenetia can offer you a pass that will allow you to access the 18 most beautiful of venice’s churches, and admire the priceless works of the great Italian masters. Paolo Veronese in San Sebastiano, the eighteenth century of Tiepolo in San Polo, and the Gesuati, the majestic Carpaccio altarpiece in San Vidal. The sculptures of Canova ai Frari, Titian in San Giovanni Elemosinaro, the splendid architecture of the church of Santissimo Redeemer del Palladio … the Vivarini, Palma il Giovane, Schiavone, Vecellio, Bellini. To understand the authentic Venice, visiting its churches is a fundamental part of understanding its soul!

The churches covered in the tour are:

Book this experience, then download the online voucher and exchange it for the pass from Monday to Saturday at the Church of Santa Maria del Giglio (5 minutes from Piazza San Marco, towards Ponte dell’Accademia).

To collect your Chorus Pass you must present the printed voucher or show it on your smartphone at the ticket offices of the churches of Santa Maria del Giglio. At the ticket office you will also be given a map of Venice indicating the position of the churches included on the circuit.
The visit of the churches included in the circuit is possible on Monday from 10.30 to 16 and from Tuesday to Saturday from 10.30 to 16.30. Schedules may include seasonal variations. In the case of ongoing restoration work, some churches or parts of them may not be accessible

Whatever is not specified in the “Included” section.

There will be no refund in case of a NO SHOW.

Suitable for everyone: singles, couples, families, and groups
Pass is valid for 1 year, and provides you with a single admission to each church
Free admission for kids up to 11 yo, and disabled persons with a companion/attendant