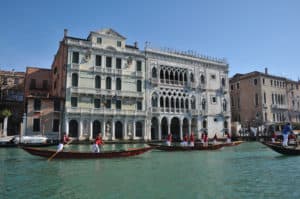 The feast of sensa today: the story of who was there!

We were looking forward to telling you about this event:festa della sensa, to which we participate each year ! An incredible and unforgettable emotion and you know, the first time you dod it, you never forget!

At the start of the construction site at 8.30 a.m., on these occasions, there is always a bit of excitement: you can’t be late! And so, in yellow and blue uniform and white skirt (the colors of our rower), we started off enthusiastically for a truly amazing experience. How strange it was to be this time on the other side and see how many people from the shore were waiting for our passage along the Grand Canal … our sandal among hundreds of colorful boats!

At Piazza San Marco around 10.00 a.m., the right “lifter” waiting in the basin of San Marco for the start of the water parade with the Serenissima and the authorities at the head. Destination: San Nicolò al Lido.

At the height of San Nicolò, always staying on board of our beloved sandoleto, we witnessed:

Now, I may be a bit of a party, but if you are in Venice you shouldn’t miss the spectacle of this procession: when will you ever happen to see all these boats? Take a seat in time in Riva degli Schiavoni or Riva dei sette martiri together with hundreds of Venetians to see a parade of unparalleled traditional boats!

At the end of the official celebrations, oars in hand and sales in pope … we continued the day with a picnic with the members of our rower (but that’s another story).

In addition to the non-competitive procession, during the morning, on the same course also hold the regattas of sensa: men on gondolas with 4 oars, women on mascarete with 2 oars, very young on pupparini with 2 oars. Venetian rowing is really for everyone!

There are two great events of the past that have shaped the event, which has remained almost unchanged until today:

Already in the past, this political-religious ritual was accompanied by a real city festival. On this day, the Fiera della Sensa (Sensa Fair) began, which included shows, parties and a large market in St Mark’s Square with goods from all over the world.

The La Fenice theatre was inaugurated on the very day of the sensa of 1792: a further confirmation that this was one of the fundamental dates of the calendar of the Serenissima!

In addition to the Sensa, the other major events that involve the world of Venetian rowing are the Redeemer, the Historical Regatta and Vogalonga: discover with us these spectacular events!

But not only events on the water, discover with us also: