Discover the treasures of the charming Venice ghetto with differents guided tours. You’lle be able to discover venice synagogues and the famous places where the movie “The merchant of venice” has been realized.

The price depends on the tour chosen and number of participants. Please make a booking simulation to check the price.

Actually only one synagogue and a midrash can be visited. The museum is temporarily closed for renovation.

According the option chosen:

Whatever not specifically included

The offer is valid in case of rain as well. For cancellations up to 72 hours prior to departure, 50% of the price will be retained.
In case of subsequent cancellation and in case of NO SHOW, that is the lack of presence at the agreed time and place, no refund will be issued.

Everyday except Saturday and Jewish Holiday

When you visit Venice, one of the unmissable points of interest is the jewish ghetto. If you take a jewish ghetto tour, you will learn the amazing jewish history and discover the famous places of the movie “te merchant of Venice”.
You will visit marvelous synagogues and discover the quartier at your own pace wit a private guide!

The ghetto, is located in the cannaregio area, a very limited area of the city, where however it is possible to distinguish different historical stratifications. Today we distinguish between the Old Ghetto, the New Ghetto, and the Very New Ghetto. The heart of the Ghetto is Campo del Ghetto Novo, overlooked by the Jewish Museum and the Jewish Rest Home. You will be able to see the pawn shop, the red bank, trace the history of Venetian Jews. The external vsiit of the ghetto lasts one hour.

This tour includes the one hour external visit as previously described. Having a private english-speaking guide for the outdoor part will allow you to satisfy your questions and curiosities!

2 hours tour with visit of the synagogue

The tour includes during the first hour an outdoor visit with a private guide and then synagogue visit.

This tour has 2 options: a completely private experience and a shared visit. It will give you a truly comprehensive overview of the ghetto.
The tour we offer is as follows:
– Private English tour of the Ghetto with private guide
– English-speaking group tour of a synagogue and the midrash (45 min, 1 hour)

We propose different times for the start of the tour: 09H30, 10H30, 12H30 , 14H30 and 15H30. The tour is available all year round by reservation, at least 48-72 hours in advance. It is not held on Saturdays and on Jewish holidays. On Fridays, afternoon activities may close early in view of the shabbat and the last visit to the synagogues is held at 2.30pm.

The itinerary starts from the Jewish Museum (now closed for restoration) , in Campo del Ghetto Novo. 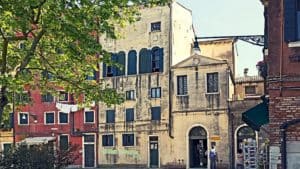 Through the Jewish Ghetto, you will see how Venice has influenced the world policy: it is in Venice that the first ghetto in the world has been created. The word comes form the venetian language.

There are five synagogues in the Venetian Ghetto. In this period only can be visited, together with the midrash and the museum is temporarly closed fo renovation. When you arrive in the ghetto, you will not be able to identify them immediately. Unlike the places of worship of other religions, the synagogues of Venice do not have an obvious entrance, they are concealed behind the rest of the apartments! During the tour you will learn how to read the ghetto and decode its symbols and elements like a kind of registered trademark. This will allow you to understand Jewish cultural customs and traditions through this particular key to the history of Venice.
In the serenissima of Venice, the Jewish Ghetto and Giudecca are the places most closely associated with the presence of the Jewish community in the lagoon. In particular, the Ghetto is a place that attracts more and more visitors and is a fascinating way to discover the relationship between Venice and different peoples. The Jewish presence was one of the first to be recognized by the Republic of Venice and the Ghetto, the oldest in Europe, was founded 500 years ago.

Jewish Venice Ghetto: what you will see during our Tours

Although it is a small area of ​​the city, it is possible to distinguish different buildings and details from different historical periods. Today we distinguish between Ghetto Vecchio, the new ghetto and a very new ghetto. The heart of the Ghetto is Campo del Gheto Novo, which overlooks the Jewish Museum, the Banco Rosso (one of the ancient pawnshops that were active in Venice) and the Jewish Retirement Home. 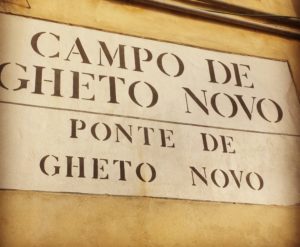 as the area of Venice in which Jews were compelled to live by the government of the Venetian Republic. The English word “ghetto” is derived from the Jewish ghetto in Venice. The Venetian Ghetto was instituted on 29 March 1516 and is the oldest Jewish ghetto in the world.

The Ghetto is an area of the Cannaregio sestiere of Venice, divided into the Ghetto Nuovo (“New Ghetto”), and the adjacent Ghetto Vecchio (“Old Ghetto”). These names of the ghetto sections are misleading, as they refer to an older and newer site at the time of their use: in terms of Jewish residence, the Ghetto Nuovo is actually older than the Ghetto Vecchio. The ghetto was connected to the rest of the city by two bridges that were only open during the day.

Though it was home to a large number of Jews, the population living in the Venetian Ghetto never became a distinct “Venetian Jewish” ethnicity. Four of the five synagogues were clearly divided according to ethnic identity: separate synagogues existed for the German , Italian,  Spanish and Portuguese and LevantineSephardi communities. The fifth, the Scuola Canton, ws built as a private synagogue for the four families, one of them the Fano family, who funded its construction, and also served the Venetian Ashkenazi community. Today, there are also other populations of Ashkenazic Jews in Venice, mainly Lubavitchers who operate a kosher food store, a yeshiva, and a Chabad synagogue.

Languages historically spoken in the confines of the Ghetto include Venetian, Italian, Judeo-Spanish, French, and German. In addition, Hebrew was traditionally (and still is) used on signage, inscriptions, and for official purposes such as wedding contracts (as well as, of course, in religious services). Today, English is widely used in the shops and the Museum because of the large number of English-speaking tourists.

Where is the Jewish Quarter in Venice?

The Ghetto of Venice is located in the Cannaregio district, about 5-10 minutes walk from the Santa Lucia train station. Coming from the station you can access it by crossing Ponte delle Guglie and turning immediately left into Fondamenta San Giobbe. After about 50 meters you will take the Sotoportego del Ghetto, on the right.
It is also possible to enter the Ghetto from Fondamenta degli Ormesini, a place of lively nightlife and very recommended for an evening aperitif. From the Fondamenta you cross the iron bridge that leads to Campo del Gheto novo.
The Venice ghetto is also well connected to ACTV water buses. The nearest stops are “Guglie” and “San Marcuola”, the latter is on the Grand Canal.

***
The Jewish Ghetto of Venice is a small but fascinating world to be discovered. Here are some further tours where you can find out about history and stories that will intrigue you.

Venice ghetto
Venice Synagogue: visit to the hidden jewels of the Ghetto