Things to do in Padua

Padua - the sister of the beautiful Venice as an ancient saying goes. Not far from the city of the Doge is the lively city of Padua, Italy. What is there to see here and what is there to do? We will tell you about its historic centre and what else there is to see in the area.

Padua, is also called the city of the "three without". The first refers to sant'Antonio st anthony), patron saint of Padua making Padua the city of the "Saint". The imposing Basilica of Saint Anthony where his relics reside is dedicated to him in Piazza del Santo. This church contains a mix of various architectural styles: from the Gothic to the Byzantine to the Romanesque, with 8 oriental domes reminiscent of the nearby Abbey of Santa Giustina.

The second ‘without’ refers to an enormous square called Prato della Valle.  The Prato della Valle is a 90,000 square meter elliptical square. It is the largest square in Italy and one of the largest in Europe. The elliptical green island in the centre is enclosed by a canal surrounded by a double row of marble statues representing characters having a connection with the city.

The last ‘without’ refers to the the most historic restaurant in all Padua: the Caffè Pedrocchi, located under a loggia (open gallery) which, in the past was open at every hour regardless of the weather!  It was a meeting place for intellectuals, students and politicians, especially during the Italian Risorgimento, and it is no coincidence that on the upper floor there is a museum dedicated to that historical period. Today it remains a very charming place still popular with the Paduans.

Guided visit in the Jewish cemetery of Padua

The most famous monument in the city is the splendid Scrovegni Chapel.This building dates back to the early 1300s and is composed of a single room where the sarcophagus of Enrico Scrovegni is located, who entrusted Giotto with the decoration of the chapel. The painter found himself having to paint in a small, asymmetrical environment and in it he created a priceless masterpiece. He condensed the New Testament frescoes and finished with the famous Last Judgment on the back wall. It is an astonishing work.

Admission is by reservation only and remember that the Scrovegni Chapel is also part of the Civic Museums (musei civici). Take advantage of a guided tour to get the most out of your visit.

other Civic Museums that the city has are:

Walking around Padua you will notice other signs that the city welcomed various illustrious figures such as the scientist Galileo Galilei, who once studied here.

Piazza delle Erbe and Piazza della Frutta have been the commercial heart of this city for centuries and the names of the surrounding streets also refer to their ancient use as a market for goods exchange.

The two squares are divided by the splendid and imposing Palazzo della Ragione, once the seat of the city courts.This vast hall on the upper floor is the result of a unification of three rooms in 1306 and it is also fresco painted by Giotto. Unfortunately his paintings were lost due to a fire in 1420 but were later restored, and divided into twelve sections depicting signs of the zodiac, arts and crafts. 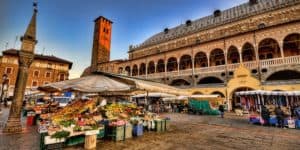 When you are in Piazza della Frutta, pay attention to the missing column in the north-west corner of the Palazzo della Ragione, it is said that it was the people of Vicenza who stole it! In reality it is likely that the reason it was removed was to ease the passage of wagons with goods.

Stay in fruit square, and head towards the corner called canton dee busie (corner of lies) Being a market area, it is known that often the less honest merchants tried to cheat on measures of goods so some ancient measuring units from Padua for flour, grains, cloth and bricks were engraved on the stone. Those who were caught cheating were tied with ropes in this corner and their properties auctioned in public!

Behind piazza delle erbe is the area of ​​the Jewish ghetto, a reminder of a historical period where the Jews were segregated until 1787, and given an evening curfew. The area is recognizable by the various buildings that grow in height and the narrow streets. If you want, continue the walk to the church of Santa Maria dei Servi and admire the statue of the angel lying inside it.

In our area there is a famous nursery rhyme that grandmothers sing to their grandchildren:

The University of Padua was very renowned in ancient times and still continues to be very popular with students from all over Italy and the rest of the world. You can visit the Palazzo del Bo which today houses the faculty of law with a guided tour.

The university botanical garden of Padua was founded in 1545 to help medical students distinguish medicinal plants and became UNESCO World Heritage Site in 1997. Plants are ordered according to use and characteristics: from poisonous ones, to insectivores, to medicines up to the rarest plants.

Inside is also the Biodiversity Garden opened in 2014, which has a very low environmental impact, and where more than 1,300 plant species are collected and in which the various climatic zones of the earth have been recreated (pluvial, temperate, Mediterranean and arid)

In Padua you do not have gondolas but you will be onboard the padovanella, a typical river boat that will sail you up to ramparts, medieval and Renaissance walls. The captain will tell you stories and legends of the area while you take in the  magical views.

The thermal baths of Abano: the best thing to do in Padova

The area surrounding Padua is rich in thermal spas Less than 10 minutes by train is Abano Montegrotto which has one of the largest thermal hot springs in Europe. Here you can combine relaxation and health with good food and the beauty of nature. The hotel spas have access to thermal waters rich in dissolved mineral salts, healthy air and healing mud.

Cycling through the Euganean hills, among natural beauty

If you enjoy being active why not try a nice bike ride? The Euganean Hills await you with beautiful natural green landscapes.

You can easily cycle to historic places like Battaglia Terme or pretty villages like Acquà Petrarca or even the odd castle! You can hire a bike to cycle around the Colli Euganei, one of the largest natural parks in the region, rich in trekking and bike trails. The historical and artistic heritage is stunning. Among Palladian villas, castles, excellent farms and beautiful landscapes, there are plenty of places to visit.

And don't worry if all the exercise makes you hungry, the tasty typical Paduan dishes will hit the spot!