Venice by night is not only starry sky and lapping waves, it is also culture and sophistication, which can be well found in classical music and opera concerts offered here and there throughout the lagoon. Baroque and opera are among the most important artistic expressions of the city on the water. When talking about Venice concerts, we can’t miss Baroque music, a genre following Renaissance music, that connect us to the figure of Antonio Vivaldi: Venetian composer and virtuoso violinist, whose best known work is undoubtedly the “Quattro Stagioni”(four seasons).

Evening in Venice – Tours, dinner and concert – experience the city at its best!

Vivaldi’s figure is much loved and proudly remembered by us Venetians, perhaps also for his humble origins: the family was large and certainly not sailing in gold, but his undisputed genius knew how to make his way.

Antonio Vivaldi was born in Venice in 1678 and since he was a child he began to study the violin pushed by his father who, despite being a barber, was also a violinist in the orchestra of the Basilica of San Marco. Later he was probably a pupil of the greatest masters of the time, even if there is no certain information on the matter. At that time, for those who were not lucky enough to be born rich, an ecclesiastical career was one of the most suitable ways to have the possibility of a more comfortable life. Everybody nicknamed him the “red priest” because he was fawned with hair, Vivaldi seemed not to be very interested in liturgical practices, in fact it is said that he had never given mass and was decidedly more busy behind his music. His compositions, very innovative for his time, count hundreds of operas, sonatas and concerts even of sacred music, so much so that his popularity went beyond the borders of Italy to Vienna. It is said that the red priest was very vain and even happened to boast of being able to write a complete concert in all its parts in less time than it took the copyist to transcribe it.

Despite his great genius, Vivaldi, like Mozart, shared the sad fate of being forgotten by his contemporaries immediately after his death, which occurred in poverty and loneliness. It was only afterwards that his works were re-evaluated and his figure rediscovered in the twentieth century.

The four seasons is the name with which the first four concerts of the opera Il cimento dell’armonia e dell’inventione are known, in which we hear clearly the voice of the violin soloist who dialogues with the orchestra. Each one refers to a different season: the “Spring”, probably the most famous one that evokes the rebirth of nature, the Summer with its suffocating heat, the Autumn whose colours seem to merge with each other and the Winter in which the fall of the snow is evoked.

Orchestras and concerts: all the best that Venice has to offer

After a day spent wandering around the alleys and taking pictures of the most panoramic views of our Venice, why not dedicate ourselves to something more sophisticated? A well-crafted concert will give you refreshment from the labors of the day.

The four seasons are performed and, as we can expect, are part of the repertoire of various orchestral groups such as the Collegium ducale formed by an ensemble of only strings from the Veneto region, ranging from Baroque music to that of 900. This orchestra usually performs in the church of Santa Maria Formosa or in the frame offered by the Palazzo delle Prigioni (where Giacomo Casanova was also detained), joined to the Palazzo Ducale by the famous Bridge of Sighs.

Another well-known ensemble is the Musici Veneziani, made up of rigorously Venetian members who, dressed in sumptuous clothes and adorned with jewels according to the fashion of the 18th century, perform the most famous melodies of Vivaldi and the Baroque repertoire in a dreamlike atmosphere. They perform in the imposing Chapter Room of the Scuola Grande di San Teodoro, near the Rialto bridge.

From the repertoire and characteristics that differ slightly from the previous ones, we recommend the cultural association Musica a Palazzo, which you can find on stage at Palazzo Barbarigo Minotto. Their program alternates arias from the Traviata, Barbiere di Siviglia, Don Giovanni, Tosca and many other famous operas. Their performance takes place as in a musical salon, without stage, nor barriers to divide the audience from the musicians.

Classical concerts in Venice: meeting with the Venetian Interpreters 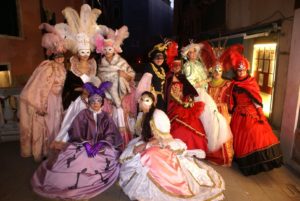 Then we arrive at the orchestra of the Venetian Interpreters who offer a repertoire of pure Venetian Baroque. Well known internationally also because they bring with them an all-Italian exuberance and a piece of our Venice in the world, from the United States to Japan.

Here we come into play at VivoVenetia and we offer you the opportunity to attend their performance with a program aimed purely at the repertoire of Antonio Vivaldi and the Italian Baroque of Corelli or Albinoni, all combined with the timeless music of Mozart or Bach, to name two of the most famous.

You will have the opportunity to attend the concert in the deconsecrated church of San Vidal surrounded by eighteenth-century works, perhaps after taking some photos at sunset of the breathtaking view offered by the bridge of the Academy.

Go back in time and enjoy the excellent classical music, maybe wearing your best dress and feeling part of that baroque Venice now distant in time that otherwise can only emerge at another time of year: that of Carnival.