If you are trying to decide what to do in Venice then we can help you! There is a wide variety of events to enjoy in the city. The more important events have ancient roots that date back to the golden years of the Republic: il redentore or Redeemer festival, Madonna della Salute festa, Festa della Sensa. Venice is a city built on water and so the world of venetian rowing is very important for the Venetians. We suggest you to take a look at the racing calendar and see if there is a rowing race or parade  you can catch while you are here. Art, in all its forms, is of great importance for Venice. Everywhere you will find art galleries, exhibitions, and classical concerts. If you have time, visit the beautiful La Fenice theatre for a show. Here are a selection of truly unmissable Venice events. 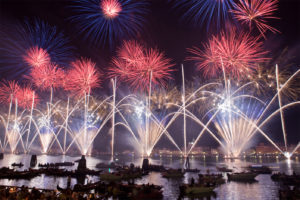 Venice fireworks – The festival of the redeemer! 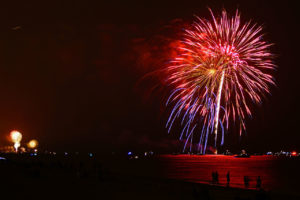 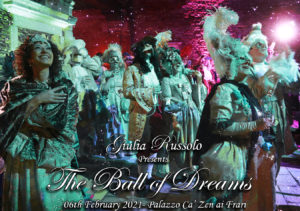 Il redentore, redeemer festival is surely the highlight of venice’s event calendar. Since 1577, it is celebrated on the third Sunday of July to commemorate the liberation of the city from a terrible plague that decimated the population by about 50,000 people (a third of it). From five centuries, each year is build a long temporary bridge to cross the Giudecca canal and reach  the Redeemer church, built on the island of Giudecca. The must of thsis two days celebration is the spectacular fireworks display over the water which is one of the longest shows in the world! The best way to celebrate it is on a boat,as Venetians do. You will have a spectacular spot to see the night fireworks. vivovenetia offers you boat party with dinner in order to enjoy fully this peculair and magic night.

For almost a thousand years, Venice has been celebrating the rite of the Marriage of the Sea during which the Doge (now represented by the Mayor), cast a ring in the sea as a symbol of the union and dominion of the Serenissima over the sea.

The feast of the Sensa is celebrated on the day of the Ascension with a naval procession: hundreds of rowing boats run along the Grand Canal until they reach the Sant’Andrea fort, to participate in the blessing of the bishop. Even today this remains an essential Venice event: all the many rowing associations take part with their different costumes and the Grand Canal becomes a riot of colour!

This is the most important event of the rowing season that takes place on the first Sunday afternoon in September. Its ancient origins go back to the 14th century, although the structured event as we know it today was only developed in 1946.

La Vogalonga – a marathon inside the Venice lagoon

The Vogalonga is a non-competitive regatta in which only rowing boats can participate traditional venetian boats like sandoli, gondolas, carlines, mascharete, but also international boats like kayaks, dragon boats and canoes. Thousands of professional and amateur rowers join it from all over the world rowing together for 32 km: starting from Venice the route winds through the islands of the northern lagoon until it returns to the city from the Canareggio canal. It is a real marathon and you need to be pretty fit!

There are many prestigious temporary and permanent art exhibitions. In addition to the network of civic museums, there is the private Peggy Guggenheim Collection, the Chorus circuit, the Querini Stampalia Foundation and the Academy Galleries, to name only some of them. In recent years Mestre, Venice mainland,has raised cultural offerings with temporary exhibitions in the Centro Culturale Candiani and the “Museo del Novecento M9”, the first Italian multimedia museum.

The Biennale di Venezia, is one of the most  important art and architectural events in the world. The programming of the Foundation embraces artistic events ranging from visual arts to theatre and music.

With such a programme, we cannot underestimate the importance of the Biennale. In an Italian landscape not always sensitive to art, this Venetian Foundation is a precious asset.

New Year in Venice concludes our selection of the best events in venice. The celebrations end around midnight with a spectacular fireworks display in the St Mark basin.  As it is cold in December, Venetians prefer to stay inside among panettone, prosecco and music, at friends’ houses or even better in a historic palace dancing until morning!

New Year in Venice is a truly  “international” event. If you want to add a little more venetian magic in this special night, we offer you a night cruise in the lagoon up to San Marco!

The Venice Carnival is of course the most famous Venice events. We have dedicated a whole section to this very special event!